The long path ahead to a COVID-19 vaccine 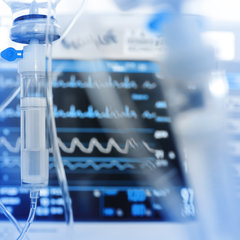 Over the past few months, there has been an astonishing rate of scientific progress, with major implications for the management of the COVID-19 pandemic. Given their access to the most up-to-date information from scientific papers and speaking to other experts in the field, Dr Dan Mahony and Gareth Powell, co-heads of the Polar Capital Global Healthcare Team, give their views on COVID-19 drug and vaccine development.

The primary goal of the lockdown was to relieve pressure on the medical system by reducing the initial peak of infection, or ‘flattening the curve’. Ultimately, this viral infection stops being a major problem when the population has developed herd immunity – likely to require 60 to 70% of the population to have developed immunity to the virus – either through infection or vaccination.

Flattening the curve may reduce the stress on the healthcare system but the area under the curve is not really changed by a temporary lockdown. All things being equal, it just buys you time to develop potential treatments and, ultimately, a vaccine.

We are now over the first peak and moving into the next phase.

Scientific progress over the past few months continues to move at an astonishing rate and there have been a number of advances in diagnostic testing with several others set to roll out soon. The antigen test assesses whether an individual has an ongoing viral infection. This is usually done with a nasal swab and a detection technology called PCR. In the last few weeks, a number of products have been launched that significantly reduce the turnaround time for getting the test results. Becton Dickinson and Quidel, for example, have each had a new point of care test approved that reduces the time to 15 minutes.

There has been a lot of interest in the antibody test that determines if someone has been previously infected with COVID-19. There were hopes this could be used as an ‘immunity passport’, however it is not clear what the presence of antibodies signifies. Some patients are able to recover from COVID-19 without a positive result in such antibody tests.

Another area beginning to get more attention is the role of T-cells in a viral infection. Research evaluating the T-cell response to COVID-19 is still at an early stage, but we expect to see more data published soon and this could become an important new type of diagnostic test that could more accurately evaluate who may be at risk from COVID-19.

There are three phases of a COVID infection, and it helps to show where the different therapeutics are targeted.

At last count, there are over 2,600 clinical trials ongoing or planned for repurposed drugs against COVID-19. There has been some recent success, but until we get specifically targeted therapies against coronavirus, then none of these therapies will be a silver bullet.

Instead, we are beginning to assemble a selection of therapies at doctors’ disposal that will hopefully improve outcomes for patients – particularly those who are treated in hospital. Over the past few weeks, we have seen data on three key drug candidates, one of which – remdesivir – we will look at here.

Remdesivir is a drug that was developed by Gilead originally as a treatment for Ebola. This is an anti-viral drug administered by injection that blocks the replication of the virus. In a recent clinical study, it had a positive effect on patients hospitalised with COVID-19 in terms of reducing disease burden but there was no significant improvement in survival compared to a placebo. The drug received rapid approval and is being used but supply is limited until manufacturing ramps up further.

Understandably, there is growing enthusiasm and expectation for some of the ongoing vaccine programmes currently under way. There are now well over 100 programmes in development, a decent number already in the clinic and a number of different vaccine technology platforms have been employed.

That said, it is important to sound a note of caution. Development of a vaccine is not a simple turnkey solution. There are many viruses where we have failed to develop a vaccine, least of all a virus that was discovered last year. Nevertheless, companies are pushing ahead, and we have seen a number of early clinical studies published in the past few weeks. The frontrunners are programmes from Moderna, Pfizer and Oxford/AstraZeneca with three Chinese companies – Sinovac, Sinopharm and CanSinoBio – also making rapid progress.

The published data from the early clinical trials are supportive of progression into pivotal Phase III trials, although these were in small numbers of patients.

It seems as though each of these vaccines is eliciting an immune response – we can see antibodies that bind to SARS-CoV-2 in the blood of vaccinated individuals. However, it is difficult to compare the results on an apples-to-apples basis as the methods and protocols are slightly different.

In addition, no major safety signals have been seen so far – but these are small studies.

This graphic above shows the six leading clinical programmes, representing a range of different technology platforms.

Everything is being done at breakneck speed, which reflects the clinical need but is something we are wary of when it comes to clinical development. We expect some initial data to be released before the end of the year and there are two key aspects that we all need to be focused on.

If any of these vaccines meets the efficacy measure, the second critical issue is the duration of protection. If the effect of a vaccine begins to wane after 3-6 months, it is not clear what benefit a mass vaccination programme would have.

Third, we are beginning to get a clearer picture of the potential manufacturing capacity for a vaccine, potentially in the billions of doses by 2021. Many large pharmaceutical companies have begun to prepare manufacturing capacity, in some cases backed by commercial commitments from certain governments (especially the US and the UK).

It is interesting to note that some companies are looking to sell at a profit while others have indicated they will sell vaccine at cost while the pandemic is ongoing. Moreover, while companies seem very confident in their abilities to scale up, this is not a trivial process and some have more experience and capability in this respect than others.

One of the problems we see with the Phase III trial designs is they may quickly produce an initial efficacy read-out which could get people very excited. However, the duration of any protective effect and the longer-term safety data will take time to produce. Safety is absolutely paramount for a vaccine – vaccines are not like drugs as they are administered to healthy individuals. It is important to show there are no serious adverse events from the vaccination itself. In particular, there have been situations in the past when a vaccine candidate has actually made vaccinated individuals more vulnerable and exacerbated a viral infection rather than protect against it.

In addition, it seems unlikely that the first-generation vaccine candidates will be the best we can do. If a vaccine reduces the infection rate by only 50%, there is still a 1-in-2 chance that a vaccinated person could get infected. Additionally, even if 80% of the population gets vaccinated, this would result in only 40% herd immunity, well below the 60-70% that is thought to be required.

As we await initial data from the pivotal Phase III studies from some of the vaccine candidates which may result in a near-term approval, unsurprisingly, the companies seem more confident than we are. As always, we are hoping for the best and that our concerns prove to be unfounded, but there may still be a long way to go before we have this disease under control.

PCGH: Meet the manager & board

Where next for the healthcare sector?