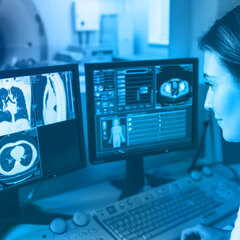 Global equity markets experienced similar dynamics to those seen in February, with rising rates and inflationary concerns the dominant themes in March. Indeed, throughout the first quarter growth stocks materially underperformed value stocks and 52-week momentum ’winners’ underperformed 52-week momentum ‘losers’. Looking at the healthcare subsectors, the reporting period witnessed strong performances in distributors, managed care (MCOs), healthcare services and healthcare facilities. By contrast, March was a difficult month for biotechnology, especially for the small and mid-cap universe. The Russell 2000, such a dominant force in 2020 and in early 2021, was down nearly 9% (in dollar terms) in March leaving the index essentially flat YTD. The Company’s NAV increased 4% in March, which was ahead of the benchmark (MSCI AC World Daily TR Net Health Care Index) which increased 3.6% for the month.

As mentioned above, March was a challenging period for small and mid-cap healthcare stocks, with the market presumably challenging its assumptions on those companies with stretched valuations and digesting the implications of rising rates on terminal values. The balance to the equation can be seen in the strong performance of the healthcare mega-caps (defined as a market capitalisation of >$50bn), which really started to gather momentum through March. While not exclusively, some of the key drivers behind that mega-cap performance sit within the MCOs, services and facilities subsectors. In terms of fundamentals, the MCOs are benefitting from a supportive political backdrop, what appear to be conservative 2021 guidance assumptions and attractive valuations given the medium-term growth potential. Further, as insurance companies MCOs have large investment portfolios that benefit from rising rates, creating a potential tailwind to EPS growth that will phase in over the next few years. The distributors’ performance reflects positive earnings momentum, attractive valuations plus a near-term tailwind from distributing COVID-19 vaccines.

With the generous capital markets environment, we believe that the industry is well capitalised and has the opportunity to maximise the returns it can generate from its internal assets.

To offer balance, it is worth reflecting on recent underperformance of the biotech sector. To be clear, we believe the positive drivers that have been responsible for shareholder value creation remain firmly intact – namely an ever-improving understanding of human biology and the ability to take that knowledge into the clinic, and ultimately onto the market, to help patients. Further, with the generous capital markets environment, we believe that the industry is well capitalised and has the opportunity to maximise the returns it can generate from its internal assets. The area of uncertainty for us is more macro-driven, specifically how the biotech sector as an asset class behaves in the context of a rapidly rising rate environment. In that context, we are focussed on more mature companies with underappreciated commercialised products and/or overly discounted, late-stage pipeline assets.

Positive contributors were AmerisourceBergen, AdaptHealth and UnitedHealth Group. Interestingly, there was little by way of material newsflow in the period for any of these companies. AmerisourceBergen, alongside its distributor peers, continues to enjoy positive earnings revisions and to prove its value to the healthcare supply chain. Home health and services provider AdaptHealth recovered during March following a challenging February. MCOs, such as UnitedHealth, performed strongly in March, given the supportive political backdrop, what appear to be conservative 2021 guidance assumptions and attractive valuations given the medium-term growth potential.

Negative contributors were ACADIA Pharmaceuticals, Biohaven Pharmaceutical and Neurocrine Biosciences. The negative contributors in March all had several characteristics in common, but also offered individual reasons for their struggles. Mid-cap biotech companies with a focus in neuroscience, ACADIA Pharmaceuticals, Biohaven Pharmaceutical and Neurocrine Biosciences all had a difficult month. The biotech sector struggled in March, especially those further down the market-cap scale, but esoteric factors contributed to the struggles of ACADIA, Biohaven and Neurocrine. ACADIA surprised the market early in the month with a negative update in relation to its US filing to expand the label-approved psychosis drug Nuplazid. In a surprising turn of events, the FDA announced it had “identified deficiencies that preclude discussion of labelling and post-marketing requirements/commitments”. We have subsequently learnt that despite prior agreements with the Division of Psychiatry regarding the pivotal Phase 3 HARMONY study design targeting a broad DRP patient population analysed as a single group, the Division cited a lack of statistical significance in some of the subgroups of dementia, and insufficient numbers of patients with certain less common dementia subtypes as lack of substantial evidence of effectiveness to support approval.

Biohaven continues to execute operationally with its migraine franchise but also negatively surprised the market, this time by announcing a $200m capital raise. Lastly, Neurocrine announced the failure of a Phase II study looking at a very difficult to target indication in negative symptoms of schizophrenia. A high-risk/high-reward opportunity, the prima facie correction in the equity value does feel a little overdone.

The recent selloff in high-growth assets also presented us with an opportunity to re-engage with Align Technology, a company with a leading position in the fast-growing clear aligner market.

As frustrating as the volatility in March has been, especially in biotech, it has created some exciting investment opportunities. For example, during the period we added two European biotech companies to the portfolio, Argenx and Genmab. Argenx has an asset called efgartigimod for the treatment of myasthenia gravis (MG) that could be approved by the US FDA in late 2021. MG is a chronic, neuromuscular disease that leads to varying degrees of skeletal muscle weakness. That same asset, efgartigimod, is also in development for chronic inflammatory demyelinating polyneuropathy (a neurological disorder that targets the body’s nerves) and primary immune thrombocytopenia (an immune disorder in which the blood does not clot normally). Genmab, and its various partners, already enjoys the economics from three commercialised assets in the fields of oncology, multiple sclerosis and ophthalmology, but also has a deep pipeline of assets, primarily in the field of oncology. The recent selloff in high-growth assets also presented us with an opportunity to re-engage with Align Technology, a company with a leading position in the fast-growing clear aligner market. We also started a position in Japanese pharma company Kyowa Kirin, a company with commercialised assets but also a very exciting, late-stage pipeline asset in the field atopic dermatitis.

We hope we have been consistent in how we have been expressing our enthusiasm for the healthcare sector, given where we see valuations relative to the exciting opportunities that lie ahead. While the first quarter of 2021 offered a number of updates that add to our conviction, now is probably a good time to pause for breath and revisit US politics. As a reminder, late in March President Joe Biden released an outline for part one of his estimated $4trn stimulus package, a package that still needs to navigate through a split Congress. Part one, pegged at $2.25trn, focusses on transportation, renewable energy, manufacturing and efforts to combat climate change. To cover the costs of the eight-year proposal, Biden wants to raise corporate taxes to 28% from 21% plus the plan also seeks a minimum tax on profits US corporations earn overseas, increasing the rate to 21% from roughly 13%.

With regards to healthcare, Biden also proposed a $400bn plan designed to significantly bolster Medicaid coverage of long-term care outside institutional settings. The funds would go towards providing wider access to home and community-based services, while also bolstering the largely underpaid frontline caregiving workforce. To be clear, the proposed increase in funding resides within Medicaid (an assistance program for low-income US citizens) and will have a limited near-term impact on traditional home-health companies given the majority of their revenues come from Medicare (an insurance program that serves the over 65s) but the proposal itself is a clear signal of intent in terms of expanding access to home-based care, one of our key investment themes.

Part two of the stimulus package, expected sometime in April, could be more meaningful for the healthcare industry with many focussed on drug pricing. It is clearly highly speculative, but there is a school of thought that the package will include proposed legislation akin to the Democrat-sponsored HR3 Bill. As a reminder, the HR3 Bill contains quite draconian measures such as direct drug price negotiations, price controls and international reference pricing for government programs and commercial markets. The US Congressional Budget Office estimates that HR3 could generate $456bn in savings over 10 years, equivalent to c13% of US prescription drug spending on an annual basis. The chances of the Bill passing through the Senate, however, are low given the Democrat’s thin majority (assuming Vice-President Kamala Harris’ casting vote) and the influence of conservative-leaning Democrats. Instead, we believe a more moderate plan is more likely to pass through Congress, a plan that might include capping patient out-of-pocket expenses for US seniors and putting inflationary price caps on drugs.

With drug pricing and the affordability of healthcare likely to occupy near-term headlines, we feel it prudent to highlight the potential risks, risks that are heightened further for those biotech and pharmaceutical companies with portfolios that lack differentiation and do not address high unmet medical needs. Importantly, however, we are reminded of healthcare’s diverse opportunity set, a characteristic that we believe adds to the sector’s appeal.

What is the outlook for healthcare in 2022?